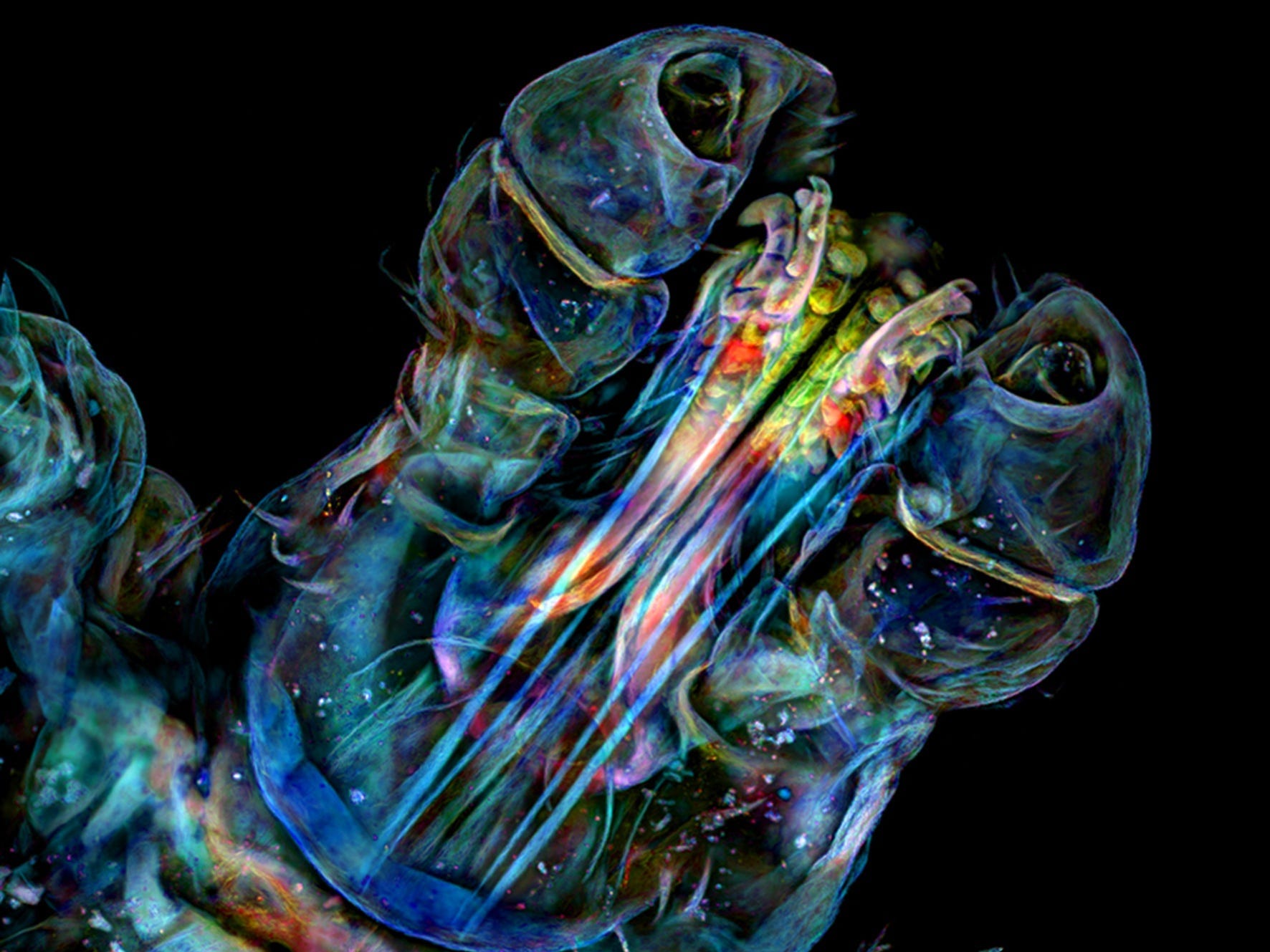 Everyday things look quite different under a microscope – including the leaf of a southern live oak tree, pictured above.

Jason Kirk, director of a microscope-imaging facility at Baylor College of Medicine, likes to tinker with microscopes and use them to photograph things from his backyard. To create the above image, he illuminated a leaf's small-scale structures with a customized microscope. Kirk captured about 200 images then stacked them on top of each other to create this vibrant portrait.

The result shows the leaf's trichomes – little outgrowths that protect the plant – in white. Pores that help the plant regulate gas flows, called stomata, appear in purple. Vessels that carry water through the leaf pop out in blue-green.

That technical handiwork led Kirk to win first place in this year's Nikon Small World competition, a contest the camera company launched in 1974 to recognize achievements in microscope photography, also known as microscopy.

"Nikon Small World was created to show the world how art and science come together under the microscope. This year's first-place winner could not be a better example of that blend," Eric Flem, a communications manager at Nikon Instruments, said in a press release.

For the 2021 competition, Nikon received nearly 1,900 entries from 88 countries. A panel of judges selected 20 winners and recognized 80 other images for distinction or honorable mention. Some of the photos, like Kirk's, show familiar things in a totally new light. Others reveal organisms all around us that we never see.

Here are 16 other striking photos from the competition.

An image of 300,000 networking neurons inside a microchip took second place in the contest. A bridge of axons – the long fibers that allow neurons to communicate – splits the two groups of neurons.

This profile of a hog louse snagged third place. It reveals the tiny bug’s leg, claw, and trachea.

This headshot of a tick reveals some hidden color.

Some of the images zoom in much closer on facets of small creatures – this image shows a single neuron from a rat embryo.

Rodents and their inner workings are common microscopy subjects. This image shows blood vessels inside the retina of a mouse’s eye.

Water fleas are also regular microscopy models. This one is pregnant with embryos.

Another photo from this year’s contest shows brine shrimps eggs after the babies had hatched.

Some images get so close to familiar things that they become unrecognizable. This is a vein and scales on a butterfly wing.

Putting cotton fabric under a microscope showed how the fibers weave together. The yellow circles are a few stray grains of pollen that got caught.

This may look like some kind of ancient tablet, but it’s actually a crystal of table salt.

Some photographers did find ancient subjects, though, like this 40-million-year-old gnat preserved in amber.

This dinosaur bone was infiltrated by silica-rich groundwater that turned its insides to agate – a colorful, crystallized quartz.

Slime mold makes a lot of appearances in microscopy, since it forms otherworldly outgrowths in different shapes. This little mold is magnified 10 times.

One photographer kept it simple and beautiful, capturing a furled portion of a pagoda flower bud.

Another took a look at a sea anemone’s mouth and tentacles by lighting up its neurons. The resulting image offers a kind of galactic portrait of the invisible biology around us.