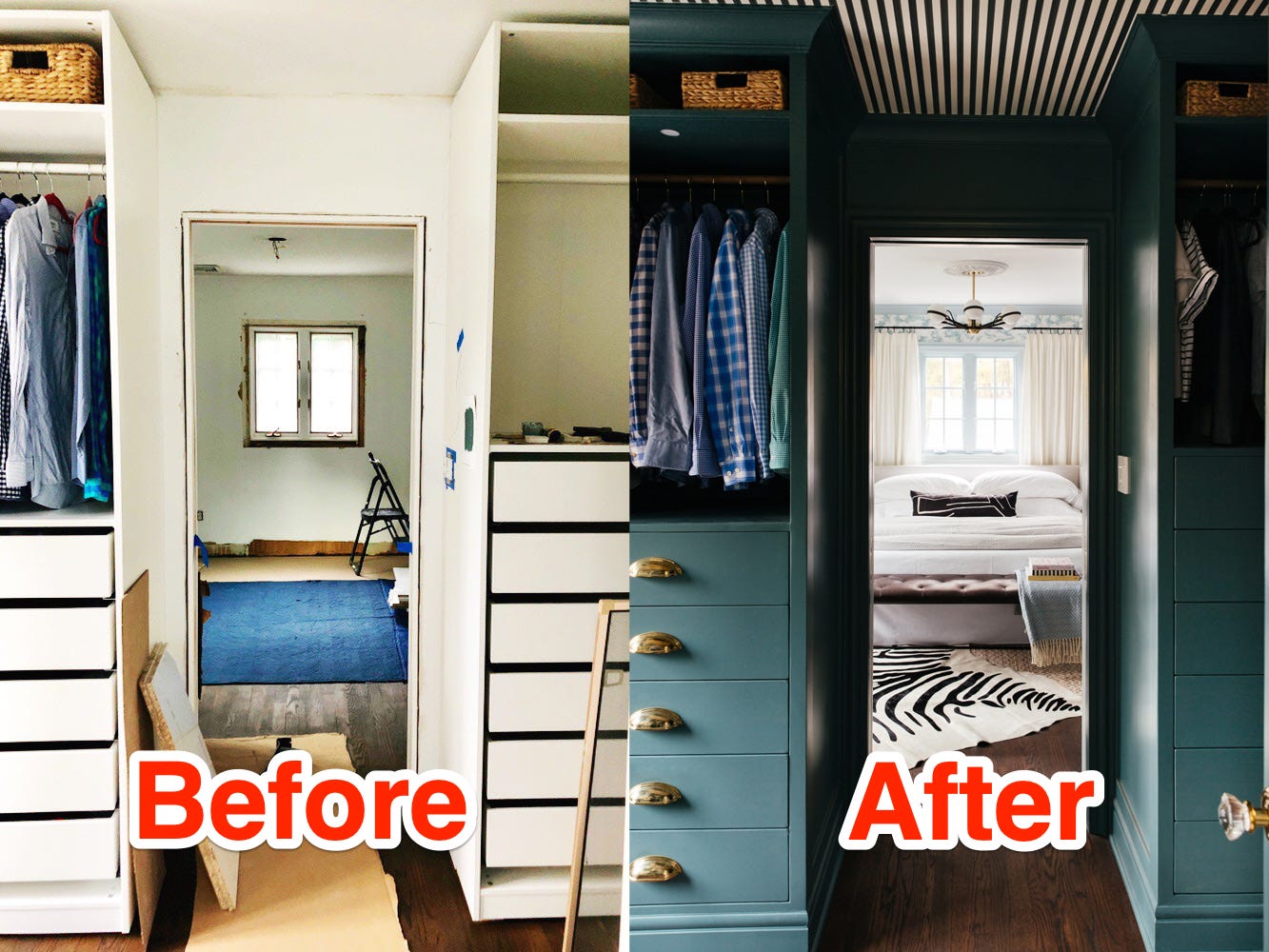 Erin Kestenbaum is an interior designer and photographer based in Connecticut.

Back in 2016, she and her husband bought a 1940’s Colonial house that they have been renovating themselves, including several projects for the One Room Challenge. Her walk-in closet renovation based on the Ikea Pax wardrobe system is currently the most popular post on the IkeaHackers blog.

Kestenbaum was inspired by this walk-in closet in Jenny Wolf’s Brooklyn townhouse.

“I absolutely adored the blue, custom cabinetry and decided I was going to figure out a way to get a similar look in my own house with a non-custom budget,” she wrote in a blog post about the project.

The Ikea Pax wardrobe system provided the base for the project and solved several problems.

First, she and her husband had never build cabinets before; second, doing it all from scratch would have taken forever; and third, hiring the project out would have destroyed their budget.

Read more: The top 5 do-it-yourself home renovations to maximize your property value, from the dean of a top-ranked interior design program

Using Ikea’s planning tool to order the right-size components was just the beginning.

“Spend a lot of planning how you want the finished hack to look, and then be flexible as you go,” Kestenbaum told Insider. “Sometimes there are nuances in the IKEA products that require some creative solutions when upgrading them.”

They also decided to skip Ikea’s storage accessories, like pants hangers and shoe trees, in order to keep the look clean and simple.

An older house means uneven floors, so they carefully added shims to level everything out.

The shims would be covered by baseboards.

… and used paintable wallpaper to cover the seam at the back of the cabinet.

They also covered up unused drill holes with about a dozen packs of plugs that Ikea sells, but apparently not many people know about.

Then they added the baseboards, crown molding, and trim.

For the trim, they used half-inch poplar boards that they cut to size with a table saw.

Using the same poplar board as the trim, they cut out fronts for the drawers.

The fronts were simply attached with screws to the existing Komplement drawers.

To make the shiny Ikea finish into a paintable surface, Kestenbaum used a shellac-based primer.

It’s an unpleasant chemical to use, she says, so make sure to wear a respirator and be patient. It’s also an extremely important step.

“Don’t skip over prepping the surface,” she told Insider.

Once everything was properly primed, she used a spray gun to get the professional look.

Kestenbaum has more advice about spray guns on her blog, but in short, practice makes perfect, and doing many thin coats is better than doing a few thick ones.

Some high-end hardware gives the drawers an even sharper look.

Kestenbaum used the wooden hanging rods that came with the Pax kit, just stained with some of the oil they used to finish the floors.

The results speak for themselves.

Kestenbaum says aspiring Ikea hackers need to think carefully through how they want the end result to look, and work backwards toward an Ikea base.

“There are certain IKEA products that lend themselves to looking very high-end when utilized in a hack, specifically built-in usages,” she said. “There are many IKEA items that I think you’re better off buying a higher-quality vintage piece with higher-grade materials over doing a hack.”

This project was a clear success…

“It’s beautifully and skillfully made,” said Jules Yap, who created the IkeaHackers blog. “The layout is well thought out and the color, amazing! Hardly anyone would have thought it began as white, plain IKEA PAX wardrobes.”

… but Ikea hacks don’t always have to be so ambitious.

“A successful hack, I would say, is when it serves your purpose,” Yap told Insider. “Some may think that it needs to be Instagram-worthy to be deemed a successful hack, but that’s not necessary. At the end of the day, we hack for ourselves and our home. And if it makes us happy, I say let’s bring out the meatballs and celebrate.”

Start with a coat of paint and some fresh hardware, and soon enough you’ll be hacking like a pro.

“No matter how well you prepare, there will be mistakes. Don’t sweat it. Learn and move on. You’ll get better at it,” Yap said.

Check out the full post on Kestenbaum’s blog, or head over to IkeaHackers for a more detailed set of instructions to do this project yourself.