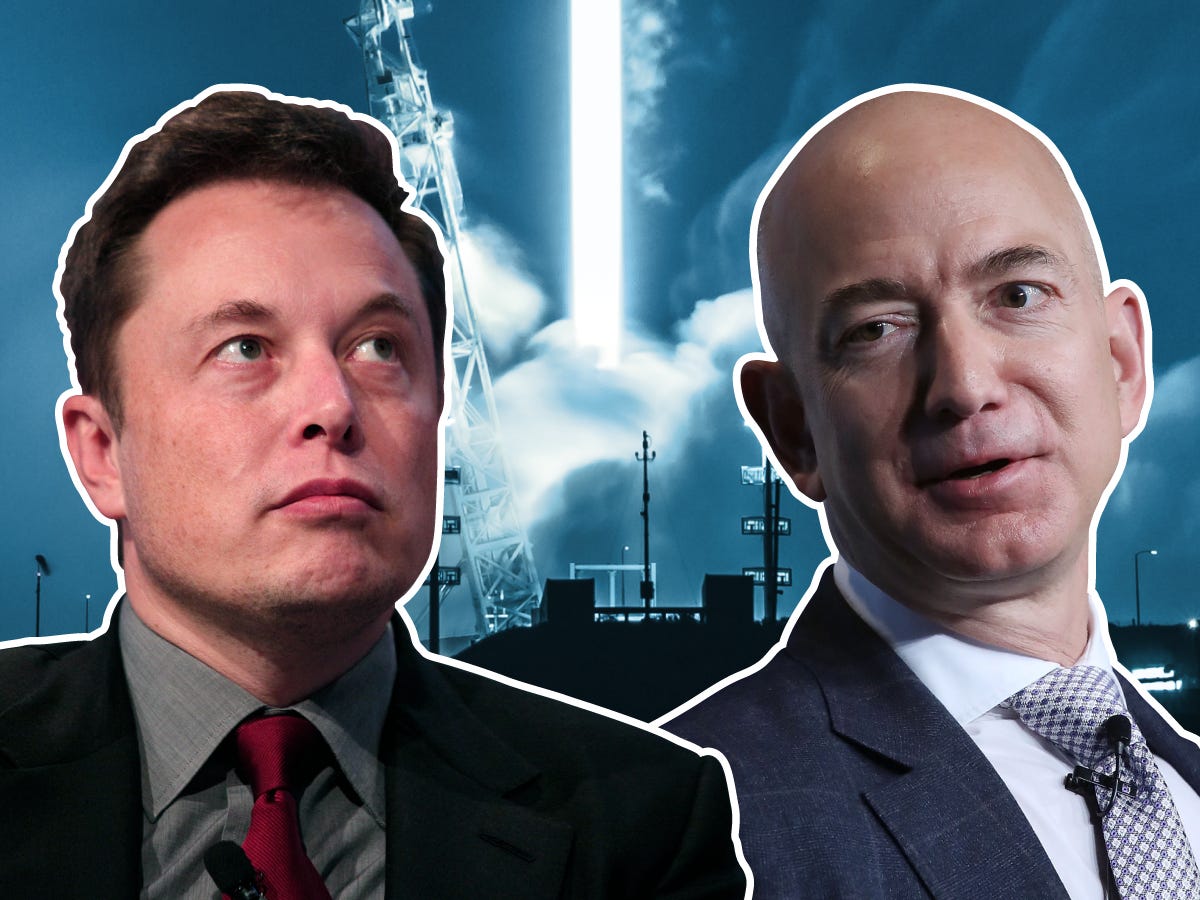 We are currently in the middle of a new space race, except this time it's not between conflicting nation-states – it's battling tech billionaires.

In the near future, both Blue Origin and SpaceX hope to help NASA return astronauts to the moon.

But neither men are content to talk about near-term goals. Both have laid out grandiose visions for space colonization.

Read more: These 4 companies are leading the charge in 'space vacations' – from giant balloon flights to orbital hotels

Elon Musk's gaze remains fixed on Mars, where he claims he wants to start building a human settlement by the 2050s and where he has said he would like to die (although, he noted, not on impact).

Bezos' vision is a little closer to Earth. In 2019 he said he wants to develop a "sustained human presence" on the moon, proposed heavy industry could be moved off-Earth, and said humanity could live in O'Neill cylinders – huge spinning space stations which would simulate gravity.

So how close are we to actual space colonization? In 2019 Insider spoke to three experts to sift through the tech moguls' bombastic rhetoric and uncover some of the real scientific challenges.

Being in space for long periods of time has a big impact on human bone density. A 2013 study of 35 astronauts found that on average they lost more than 10% of bone density after flying missions of between 120 to 180 days.

"Mars has more gravity than the ISS [International Space Station] but not a lot, it's still about a sixth of Earth's. So you've got a serious issue there as to whether people can live there for any serious length of time at all. That doubles down if you want to try raising children and anything that approaches an actual colony," said David Armstrong, an astrophysics professor at the University of Warwick.

"If trained astronauts, who are prime people, are losing significant amounts of bone density – enough that you'd normally lose by the time you're 50 and 60 – how could someone live permanently in that environment?" he asked.

Another side-effect of microgravity is a drop in muscle mass. According to Prof. Kevin Moffat, who specializes in human physiology in extreme environments, there's no proven way of counteracting it.

"There's all sorts of debate over what happens with muscle conditioning. Tim Peake when he was up there you saw him conditioning himself on these running machines. The evidence is still pretty equivocal whether that really helps very much, but I suspect if I was up there I would do that as well just in case it worked," he said.

British astronaut Tim Peake used a treadmill to run the London marathon in 3 hours and 35 minutes on the ISS in 2016.

One observed change Moffat noted is that the lack of gravity on the ISS causes the astronauts' hearts to change shape. "In space your heart become rounder… because there's no gravity to pump against," he said. The shape-change is thought to lead to a higher risk of kidney stones, and so Moffat concludes is likely to affect other bodily processes in ways we don't know yet.

Space changes our "natural killer cells" and the microbiome

Moffat said there are two more areas of human physiology in space which are often overlooked. The first is the immune system – specifically a kind of cell called "natural killer cells" which help guard the body against cancer.

"We know that their levels drop massively in astronauts that live in the ISS. If you're up there for six months, probably it won't make much difference. But if you're there for two years, five years, ten years, a lifetime, then there's a set of worries I would suggest that your immune system may not be functioning to monitor your body for rogue cells," he said.

While there's still research to be done on exactly why astronauts' immune systems dip, Moffat hypothesized it's due to the change in bone density. Specifically, he thinks it has something to do with bone marrow, which is where blood cells are generated.

A second change astronauts undergo is to their microbiome. "There is as many cells in you, and on you, as of you. You're made of just as many microbes and fungi and bacteria as you are of cells of yourself. So you're just basically a machine for other stuff," says Moffat. This collection of fungi and microbes makes up a healthy microbiome. A paper published in 2019 compared the microbiomes of two twins – one who went to the ISS and one who stayed on Earth.

"There does appear to be changes in the bacterial community in their gut at least. That's a worry as well, because that will alter what you can eat," said Moffat.

The Earth's magnetic field and ozone layer protect us from radiation thrown out by the sun. Astronauts visiting the moon or the ISS receive higher doses of radiation than they do on Earth, but not deadly amounts. Venturing any further means facing deep-space radiation.

This poses a big problem for Bezos' O'Neill cylinders. "You need a huge amount of shielding material, way more than you need to build the actual structure, just to stop people getting essentially sterilized quite quickly… some of the estimates I've seen are for tens of millions of tonnes of shielding material," said Warwick University's Armstrong. Getting that amount of material into space is "beyond economically feasible," he added.

A Musk-style expedition to Mars would need to make provisions for sudden bursts of radiation. "If you happen to be out during a time of high solar activity, so some sort of solar storm or a flare… things like that, that's particularly bad. There's talk of having high-shielded areas on spacecraft which astronauts could retreat to when events like that were occurring," Armstrong explained.

The problems with "terraforming" and the Biosphere 2 disaster

Musk has talked about terraforming the surface of Mars. The term is borrowed from science fiction, and means transforming a planet to make it habitable for human life.

Armstrong didn't dismiss the idea of terraforming out of hand, simply because it's so wild you would need to account for future technologies that don't yet exist. "For these projects we're talking thousands and tens of thousands of years really," he said.

Mars' atmosphere poses a big problem, as it is so thin and Mars' gravity is so weak, molecules easily escape off into space. "We think Mars' atmosphere is so thin because it was bombarded by asteroids early on and with that low gravity that led to a lot of the atmosphere escaping," said Armstrong.

"In any short, medium, or even somewhat long-term, we're talking living in domes. On the surface is just not plausible," he said.

But dome-living comes with its own dangers. Armstrong pointed to Biosphere 2, an experiment from the 1990s which was built to simulate a closed space-colony.

"The experiment crashed and burned in all kinds of ways, but one thing that came out of it was that there were just endless complexities people didn't really expect. The concrete slowly decaying and polluting the air over long timescales, this sort of thing," he said.

Mars' soil also poses a big problem. The film "The Martian" popularized the idea of growing plant-life on the Red Planet, and according to Armstrong, it's not beyond the realms of possibility.

"The Earth's soil is a very complex thing that's been built from millions of years of organic material growing and dying, and Martian soil does not have that. There are various experiments growing things in simulated martian soil and they do actually tend to come out with positive results. The problem is that those simulants aren't necessarily accurate," he said.

"Some of the most damaging materials in the Martian soil is something called perchlorate, which we think are really quite bad," he added. Chances are Martian plants would take up these heavy minerals, which could ultimately kill people, depending on the level of exposure.

No room for democracy in space

Aside from the considerable physical and engineering challenges that go with living in space, there's another important element Musk and Bezos don't tend to dwell on – social structure.

Political philosopher Felix Pinkert of the University of Vienna believes an off-world colony would not have room for democracy as we know it. He said the challenge for any mission to Mars, for example, is it would have to start with just sending a small handful of experts who specialize in particular areas, and that could lead to a hierarchy of technocrats dictating people's lives.

On top of this, if private companies are in charge of shipping people out to colonies you could end up with effective dictatorships. "Companies are already governments in themselves. They function like governments, but they're private governments in the sense that they are not governed by the people who are affected [by them]. They are governed by the shareholders or the CEO or whatever. So it's like a dictatorship."

Despite the endless complexities associated with space habitation, none of the experts were in much doubt that it's on the way – with varying degrees of trepidation.

"On the small scale it's probably closer than you think," said Armstrong. "And having four people on Mars in a terrible environment where they're probably all going to die quite quickly but nonetheless they're there. Given how many resources Elon Musk has, I wouldn't want to put a bet against him. It's alarmingly close on a small scale, it's ludicrously far off on a big scale."

He added in an email to Insider the capacity of these colonies poses an ethical problem. "However successful these colonization programs are, it's worth remembering that the vast majority of currently alive humans are going to stay on the Earth. Bezos optimistically talked about O'Neill cylinders hosting a million people, and a Martian colony is going to be some way under that.

"One motivation for these ideas is the sense that the Earth is dead, we've polluted it too much, and we need a backup plan. If this is our backup plan, we're throwing away most of the human population. Choosing who goes is a hard ethical problem, and one which would functionally be led by a handful of US billionaires. It emphasises how much we need to look after the Earth," he wrote. It should be noted, Bezos has echoed this sentiment.

Moffat's approach is more fatalistic. "As a species, we've got to do this. We're going to crucify this planet sooner or later. So you might as well die going to Mars," he said.

All three experts agreed that just because the challenges are Herculean, that's no reason not to try. "If the choice is between Elon Musk doing the space stuff and buying himself a lot of yachts, this is definitely better," said Pinkert.