Skip to content
Apple's cheapest iPad is our favorite, but the right choice depends on your budget and needs. Here's how to decide which iPad is best for you. ... 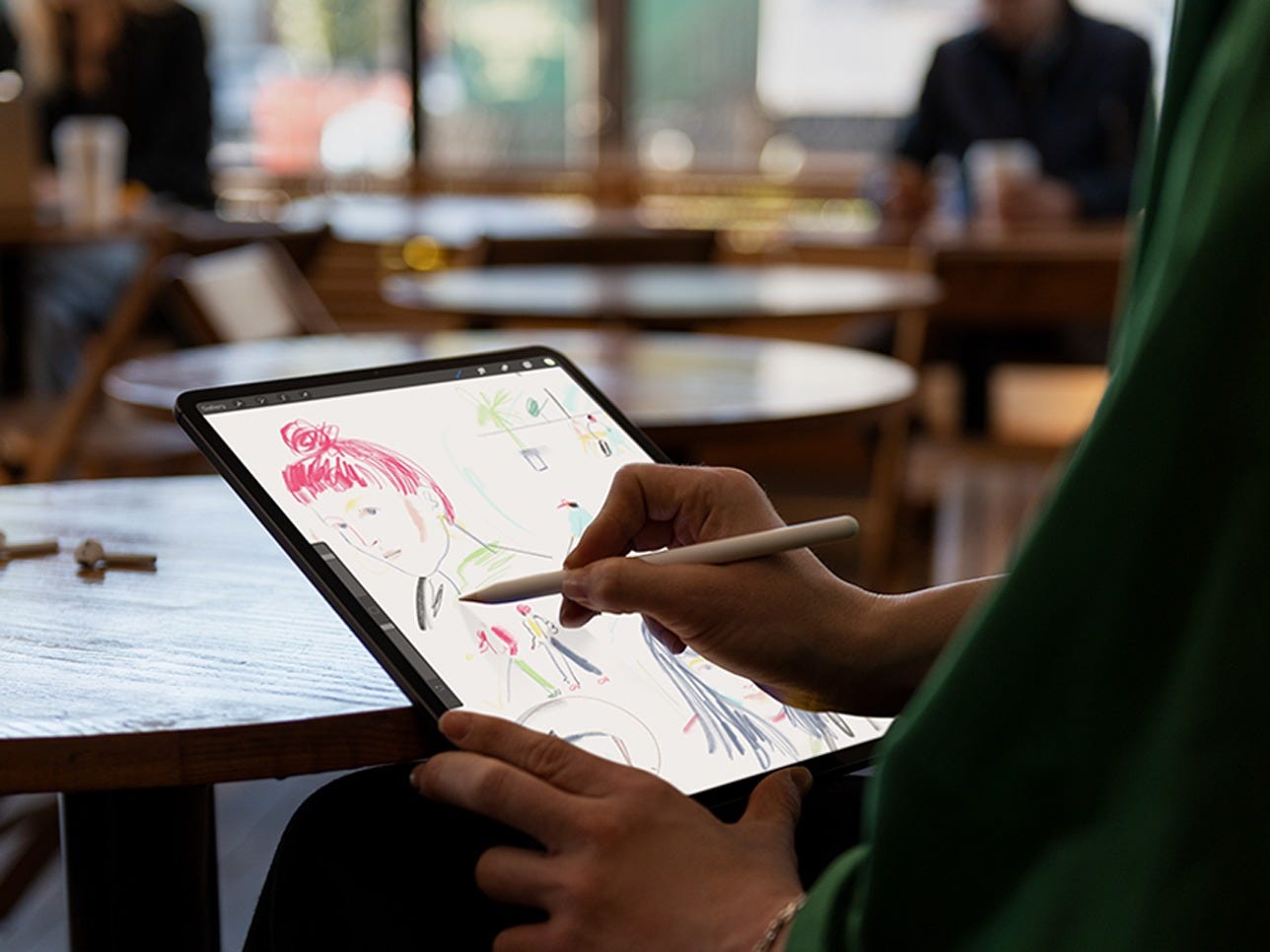 Apple is the uncontested king of tablets. The iPad is the most popular tablet in the world, with Apple beating Samsung and Lenovo by claiming 36.5% of the global tablet market.

Apple's tablet lineup is varied and surprisingly affordable. On the high end, Apple recently announced an update to the iPad Pro lineup which adds the powerful M1 chip, as well as 5G capability to the iPad for the first time, while maintaining the $799.99 price for the 11-inch model.

At $329.99, the 10.2-inch iPad is the cheapest iPad Apple has ever sold, but it's quite powerful and supports the Apple Pencil, making it a great choice for anyone in need of a general purpose tablet.

Students can also score a free pair of standard AirPods when buying a new iPad until September 27, although the 10.2-inch iPad and iPad Mini are excluded from this offer.

Other iPads offer higher performance and more features and functionality, all of which come at higher prices. But all current models will be able to run the newly-announced iPadOS 15 – which adds enhanced multitasking abilities, system-wide Quick Notes, and bigger widgets for the home screen- when it debuts in the fall.

Updated on 7/21/21 by Sarah Lord: Added details about what to expect from Apple's next-generation iPads and the best time of year to buy an iPad.

The 2020 10.2-inch iPad offers the best balance of value, performance, and features, and is the best deal for most people.

The 2020 10.2-inch iPad is the most affordable model, and it’s the best option for those picking up their first iPad. It’s also a great choice if you’re looking to upgrade from an aging iPad or iPad Mini.

The 2,160 x 1,620-pixel resolution on the 10.2-inch model is sharp and clear. The A12 processor is still perfectly capable for most apps and tasks, the battery life is long, and you can buy things on iPad with Apple Pay, thanks to the Touch ID fingerprint sensor.

Best of all, this iPad supports the first-generation Apple Pencil, an incredible stylus with virtually no lag. You will have to pay $100 extra for the Pencil, but if you like to take notes or draw on your iPad, it is well worth it.

You simply can’t beat those specs at that price point. Comparable Android tablets cost hundreds of dollars more, and the iPad still has a better app library and accessory support.

The aluminum build looks and feels premium. Both iPads are quite light, too, so you can happily binge-watch Netflix in bed or take them with you. Tech nerds will say the iPads have a boring old design, but it’s tried and true. Plus, the aluminum build is durable.

However, there are some drawbacks that are worth considering. The 1.2-megapixel front camera isn’t very sharp, which is something to keep in mind if you make a lot of FaceTime calls. And, the base model only comes with 32GB of storage. That means you won’t be able to store many apps, videos, and photos on the device and will have to keep most of your content in the cloud unless you upgrade to the $429 model with 128GB of storage.

Cons: Only 64GB of storage, price gets expensive when you add on accessories Price is creeping up

The iPad Air got a big upgrade when the newest version debuted in September 2020. New features include an all-screen design with sharper edges that’s similar to the iPad Pro’s look, the powerful A14 Bionic processor that powers the iPhone 12 series, USB-C for faster charging and connecting to computers, and a Touch ID sensor on the top button.

The tablet also supports the second-generation Apple Pencil, which is widely considered the best stylus for drawing on a tablet and features an improved design compared to the first-generation pencil. The iPad Air also has a sharp 10.9-inch Liquid Retina True Tone screen with a resolution of 2,360 × 1,640 pixels.

You can buy the iPad Air with either 64GB or 256GB of storage, and it comes in five color options: Silver, Space Gray, Green, Sky Blue, or Rose Gold. You can also choose either a Wi-Fi-only connection or a combination of cellular and Wi-Fi connections.

The 2019 iPad Mini is essentially the smaller version of the 10.2-inch iPad, and it’s the best option if you prefer a smaller tablet.

With a 7.9-inch display, the 2019 iPad Mini is Apple’s smallest tablet. It may not have the newer iPad-Pro style design, but it has all the latest specs we wanted in this update.

It’s powered by the same powerful A12 Bionic processor found inside  the 2020 iPad, and it supports the first-generation Apple Pencil. We’re thrilled Apple gave the Mini Pencil support, as it’s the best stylus we’ve ever used, and it makes the Mini a great tablet for note taking or drawing.

The Mini’s True Tone, 7.9-inch screen has a sharp 2,048 x 1,536 pixel resolution, too, so you can really enjoy watching videos, reading, and creating on the screen.

You can choose between 64GB or 256GB of storage and three color options: Silver, Space Gray, or Gold).

Overall, the iPad Mini is the best choice for those who prioritize portability above all else in a tablet. If you want a screen that’s slightly bigger than your phone for reading, watching movies, and checking email, the iPad Mini is worth considering.

The best iPad for pros

Cons: Expensive, gets even more expensive when you add accessories, multitasking and general productivity is still better on a laptop

Apple’s recently launched iPad Pros come equipped with the company’s M1 processor, bringing faster processing and better camera performance to an already-powerful tablet. But the iPad Pro’s high price and extra power mean that it’s best-suited for creative professionals looking to get work done on their tablet rather than everyday users.

The new iPad Pro’s headlining feature is a camera trick called Center Stage, which adjusts the front-facing camera as you move to ensure that you remain centered in frame. Plus, the iPad Pro benefits from the Apple image signal processor in the M1 chip, resulting in more colorful selfies. That makes the iPad Pro a strong choice for those who plan to take a lot of video calls from their iPad, or for those who plan to record video projects using the iPad’s selfie camera.

The iPad Pros also have a dual-camera system with a 12-megapixel main camera and a 10-megapixel wide lens, another factor that makes it more appealing than the iPad Air for those who want to shoot and edit multimedia content on one device.

The larger-sized model also has a new display that uses mini-LED technology, meaning that it has much greater brightness and contrast compared to Apple’s other tablets.

But for that price, the iPad Pros are really best for those who want a tablet for more than just watching videos, browsing the web, and getting light work done. That’s especially true since the iPad Air is now compatible with Apple’s Magic Keyboard and second-generation Apple Pencil. All told, the iPad Pro’s increased storage capacity, faster performance, better cameras, and Thunderbolt connectivity make the iPad Pro best for creatives that want a portable work device.

Pros: Works with even the cheapest 10.2-inch iPad, lack of latency, pressure sensitivity, made for the iPad’s screen, easy to charge, comfortable to hold

Over the years, we’ve tested a lot of styluses from companies like Adonit, 53, Wacom, and more. None of those styluses can hold a candle to the Apple Pencil. Whether you buy the first-generation Pencil or the second, you’re getting a stylus that was made by Apple in tandem with the iPad.

As such, the Pencil works with the iPads’ screens in special ways that no other stylus can. The result is improved pressure sensitivity and an impressively low level of latency. You won’t even notice a lag because it’s imperceptible. When you use an Apple Pencil, you actually feel like you’re using a normal graphite pencil.

There are a few differences between the first- and second-generation Pencils: the second-gen model has wireless charging and magnetically attaches to the side of the iPad. The first-gen Pencil charges with a lightning port on the end and doesn’t attach to your iPad. It’s also a bit cheaper.

Choose whichever makes the most sense to you, but the newer Pencil’s easier charging method and magnetic attraction to the iPad make it a winner in our book.

The best keyboard for your iPad

The Logitech K780 works with any device, connects wirelessly, and offers a full-sized keyboard with satisfying keys for typing.

The Logitech K780 is the best Bluetooth keyboard for just about any device, including the iPad. Sure, it’s not a keyboard case, so it won’t protect your iPad and provide a keyboard, but that means you get a full-sized keyboard with a number pad and satisfying keys that have good travel.

The K780 supports connections to multiple devices, so you can use it with your iPad, phone, and computer if you want. The circular keys are comfortable to type on because they are full size. Logitech also incorporated a tablet and phone stand into the keyboard’s design, so it’s easy to prop your iPad up without needing to buy a separate stand or case.

The only downsides here are that it needs AAA batteries to run and it’s not the most portable keyboard you can buy. If you want a more portable option, the foldable iClever Ultra Slim 3 Keyboard folds up to one-third of its size and can be used in both wireless and wired modes.

What to consider when buying an iPad

When will Apple release new iPads?

Apple typically announces new iPads in the fall and spring, although the timing can vary. The most recent iPad Pro, for example, launched in May after Apple announced it in late April. The current generation iPad and iPad Air both debuted last September.

Apple just updated the standard iPad last fall, but a newer version is expected to launch later this year, according to Bloomberg. The company is reportedly working on a thinner version of its least expensive iPad marketed toward students that could launch by the end of this year.

The iPad Mini hasn’t gotten an update since 2019, but that could change in 2021. Bloomberg also reports that a new iPad Mini with slimmer bezels could launch later this year around the same time as the next standard iPad.

This would be a welcome change that makes the iPad Mini feel much more like the iPad Air and iPad Pro, both of which have slimmer designs with nearly borderless screens and no home button. Apple has reportedly tested removing the home button from the next iPad Mini, although the report doesn’t say whether Apple is expected to implement that design change.

When is the best time to buy an iPad?

As is the case with most electronics, Amazon Prime Day and Black Friday are usually the best times to buy a new iPad. We saw deals on the iPad Air and  regular iPad on Amazon Prime Day this past June, for example, while discounts were available across most of the iPad lineup on Black Friday.

You can also take advantage of Apple’s back-to-school promotion over the summer if you’re a qualified student, parent of a student, or educator. There’s no discount with Apple’s promotion, but the company typically throws in freebies if you meet the purchase requirements.

This year, Apple is giving away a free pair of standard AirPods when you purchase an iPad Air, iPad Pro, or eligible Mac computer. You can opt for the AirPods Pro for just $90 as part of the deal, a major cut from the AirPods Pro’s $250 list price and $220 typical price. Unfortunately, the iPad Mini and iPad aren’t part of this promotion.