Skip to content
Authors of a new study reveal how they imaged plasma jets shooting out of a black hole nestled inside the Centaurus A galaxy. ... 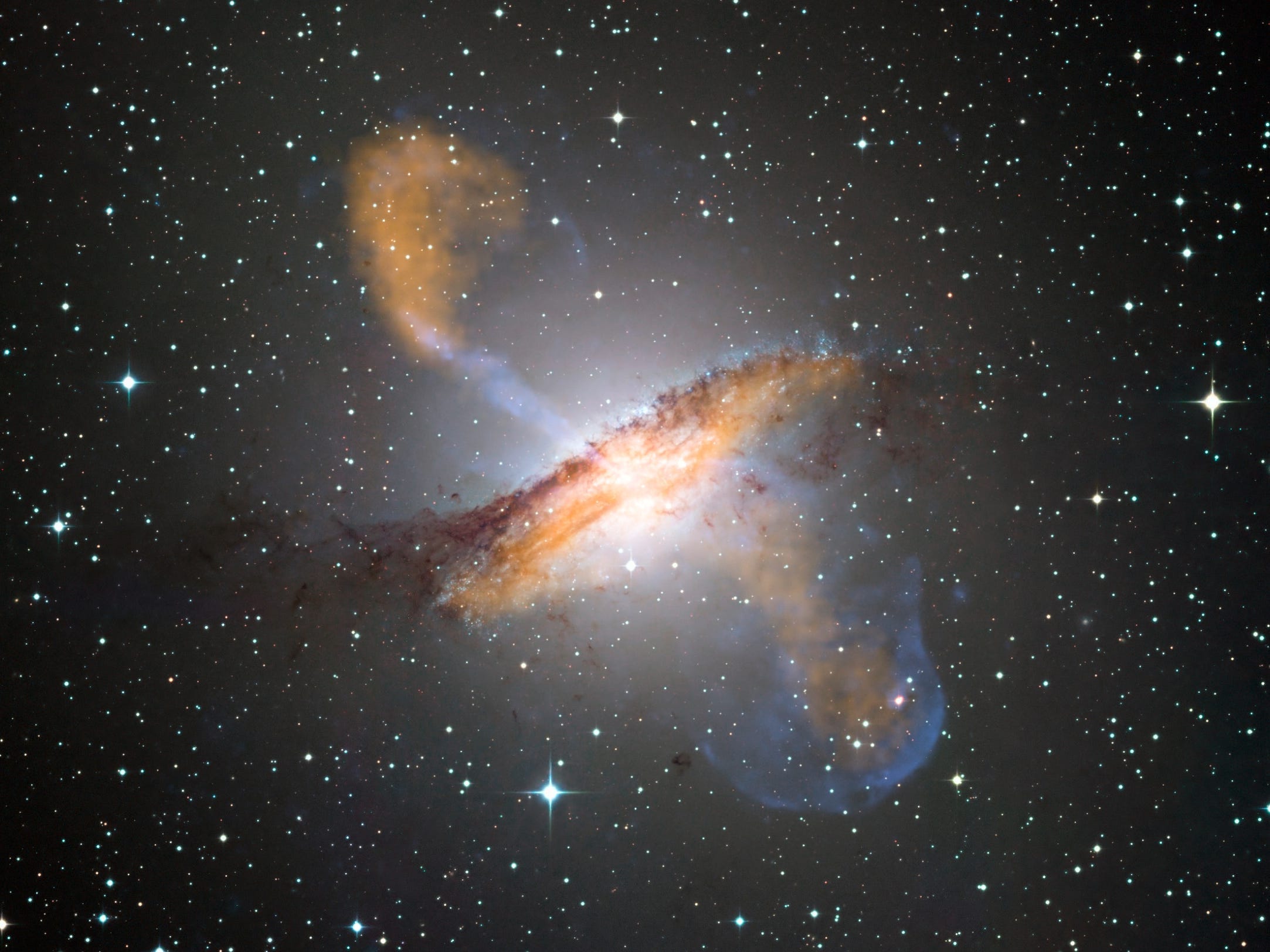 At the heart of every galaxy lies a supermassive black hole, which consumes everything that comes within reach of its gravitational pull – almost everything, that is.

Scientists have spotted plasma jets – streams of energy and hot matter – fleeing the core of certain black holes at one-third the speed of light. Researchers still aren't certain how these jets form or escape celestial voids. But a new study gives astronomers more insight into the relationship between jets and their black hole parents.

Researchers at the Event Horizon Telescope collaboration – a group that reconstructed the first-ever image of a black hole two years ago – imaged plasma jets spewing from a black hole at the center of the Centaurus A galaxy, about 13 million light-years from Earth.

Their observations reveal that all jets closely resemble one another, regardless of their black hole's mass. The jets are merely scaled in size, meaning smaller jets come from smaller black holes.

Even the smallest of these jets can spread out far across the universe, though.

"They disperse out to form gigantic bubbles of hot gas that are 100,000 light-years in size," Michael Janssen, an astronomer with the Max Planck Institute for Radio Astronomy and Radboud University and lead author of the new study, told Insider.

Up close and personal with a supermassive black hole

To image the Centaurus A jet, Janssen's team relied on data collected in April 2017 by eight radio telescopes synced up across the globe, forming one Earth-sized instrument. So the image is a reconstructed view, not a photograph.

"Think of looking into a mirror you've smashed to pieces," Janssen said. "Each shard can show you a little bit of your face. By using the limited information you get from each shard, you can piece together what you look like."

This isn't the first time scientists have looked at plasma jets from a black hole. In 2011, an international team also imaged Centaurus A's jets, but the new images are ten times more accurate and 16 times sharper than previous ones.

"We hit a magnification factor of 1 billion," Janssen said. "We're looking at the jet in unprecedented resolution immediately at the region where it's just being born and launched by the black hole."

The researchers also compared Centaurus A's jets to those from other black holes of different masses.

Their findings ultimately support the idea that smaller black holes are scaled-down versions of their more massive counterparts – and act the same way regardless of their mass or how quickly they accumulate matter and energy.

Supermassive black holes form when stars collapse in on themselves at the end of their life cycles.

Black holes spin so quickly that they distort space-time, and their gravity pulls in everything nearby. Because even light can't escape, these forces create a unique shadow in the form of a perfect circle at the black hole's center. The edge of this circle is known as the event horizon.

That gravitational pull twists light coming from the cloud of gas, dust, and space detritus orbiting the black hole's center – what's known as the accretion disk.

"Black holes feed off this accretion disk," Janssen said. "But not all particles get swallowed up. Some get ejected by the black hole and escape in the form of these jets."

Scientists haven't figured out yet what drives these streams of escapee particles, but Janssen suggests that magnetic fields located at the edges of a black hole help accelerate jets.

(Two March studies by other members of the Event Horizon Telescope team found evidence of a magnetic field near the Messier 87 black hole's event horizon.)

"As the black hole spins, these magnetic fields start being dragged around and get spun into a corkscrew structure," Janssen said.

All the while, the coiling magnetic field collects incoming particles. Then, the field springs outward and shoots out hot gas and energy away from the black hole. The strength of the magnetic field is enough to help some particles resist a black hole's gravity.

According to Janssen, the resulting jets are mindbogglingly large.

"If you could see these jets, and the Centaurus A black hole from Earth, the black hole would appear as large as an apple on the surface of the moon," he said, "while the jets would be 16 times as wide as the moon itself."