Skip to content
The books that won or were runners up for the 2021 Pulitzer Prize spanned categories such as fiction, history, biography, poetry, and nonfiction. ... 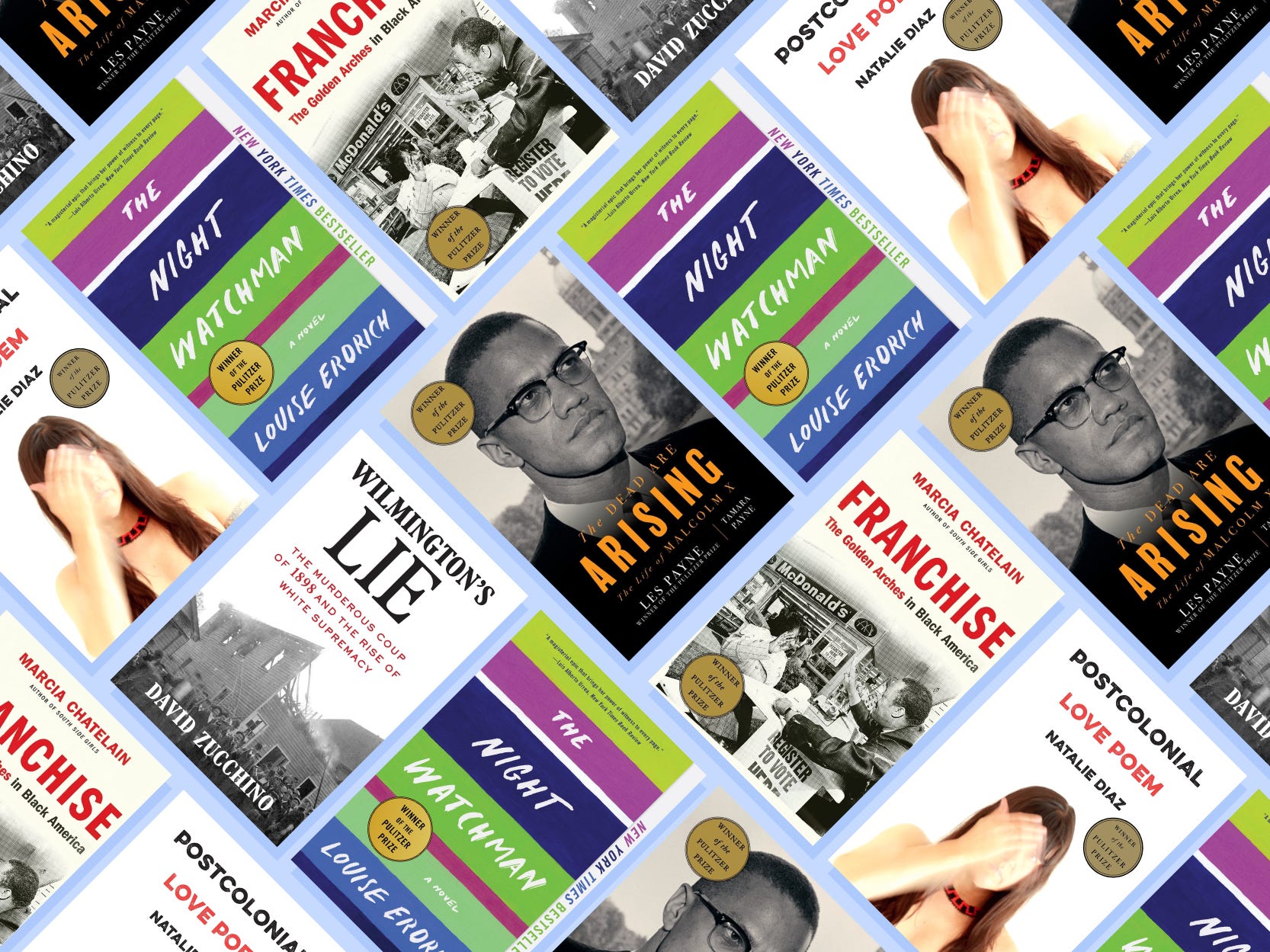 When you buy through our links, Insider may earn an affiliate commission. Learn more.

Since 1917, the Pulitzer Prize has been a mark of excellence in journalism and the arts, with a panel of acclaimed judges annually selecting profound pieces of journalism, drama, music, and literature from thousands of submissions. In this list, we've highlighted the Pulitzer Prize winners and finalists for fiction, history, biography, poetry, and general nonfiction in 2021. Each of these was written by American authors and many feature American life or history, though each category has different requirements.

Every book on this list earned its place as an incredible work of fiction, nonfiction, or poetry. If you are looking for a profound read, these Pulitzer Prize finalists and winners can offer you just that.

The 2021 Pulitzer Prize book winners and finalists in literature:

“The Night Watchman” by Louise Erdrich, available on Amazon and Bookshop from $13.19

Based on the life of Louise Erdrich’s grandfather, this novel follows Thomas Wazhashk, a factory watchman and Chippewa council member, along with his community as they fight a Congressional bill that threatened to displace and terminate Native tribes in 1953. Louise Erdrich’s work is widely considered central to the Native American Renaissance literary movement, with this novel chosen for its “majestic” and “polyphonic” qualities.

“A Registry of My Passage Upon the Earth” by Daniel Mason, available on Amazon and Bookshop from $16.99

The culmination of a 15-year project, “A Registry of My Passage Upon the Earth” is a short story collection by author and physician Daniel Mason. Spanning from London to Rio de Janeiro, these moving stories have individually earned accolades such as the Pushcart Prize and a National Magazine Award as they tell an array of survival stories from a mother seeking a cure for her ill child to a telegraph operator who discovers a companion in the Amazon.

“Telephone” by Percival Everett, available on Amazon and Bookshop from $13.29

In this tender new novel hailed for its “narrative ingenuity” by the Pulitzer judges, Zach Wells is a geologist and paleobiologist who loves to play chess with his daughter. When she begins to slowly deteriorate from a mysterious illness, Zach is driven by loss and grief through an unrealistic rescue mission, desperate for someone to save. This novel is clever and deeply emotional, a story catering to readers’ desires and written by a self-proclaimed “reader’s writer”

“Franchise: The Golden Arches in Black America” by Marcia Chatelain, available on Amazon and Bookshop from $14.79

Since the dawn of the fight for civil rights, many marginalized Americans have looked to entrepreneurship and economic opportunities as a means to achieve equality. Fast food franchises have offered success to Black entrepreneurs and brought business to struggling communities while simultaneously extracting wealth and preventing the potential advancement of workers. Marcia Chatelain is a professor of history and African American studies at Georgetown University whose account of the fast-food industry was chosen for its ability to “masterfully illustrate how the fight for civil rights has been intertwined with the fate of Black business.”

“The Deviant’s War: The Homosexual vs. the United States of America” by Eric Cervini, available on Amazon and Bookshop from $17.99

Praised by the judges as “a painstakingly researched and engagingly written study”, this account highlights the fight for gay rights a generation before Stonewall. The book follows astronomer Frank Kameny who was dismissed from his government job in 1957 after an investigation into his rumored homosexuality. Entirely based on first-hand accounts, FBI records, and 40,000 personal documents, Eric Cervini tells the necessary and true story of the first organization to protest the persecution of gay federal employees.

“The Three-Cornered War: The Union, the Confederacy, and Native Peoples in the Fight for the West” by Megan Kate Nelson, available on Amazon and Bookshop from $16.39

A perfect new read for American history buffs, “The Three-Cornered War” reframes the Civil War as one involving the North, the South — and the West. Historian and author Megan Kate Nelson introduces nine individuals who fought for control of the West in a new narration that demonstrates the effects of the Civil War on Indigenous people as well as the rest of the nation. This historical account is based on letters, diaries, and military records, cited by judges as “a lively and well-crafted Civil War narrative that expands our understanding of the conflict’s Western theaters.”

“The Dead Are Arising: The Life of Malcolm X” by Les Payne and Tamara Payne, available on Amazon and Bookshop from $18.99

The winner of numerous 2020 literary awards (including a National Book Award), “The Dead Are Arising” draws on hundreds of interviews over 30 years to create an encompassing portrait of Malcolm X. Written by the late Les Payne and finished by his daughter after his passing in 2018, it corrects the historical records and demonstrates Malcom X’s centrality in the Black freedom movement.

“Red Comet: The Short Life and Blazing Art of Sylvia Plath” by Heather Clark, available on Amazon and Bookshop from $19.40

Heather Clark used letters, manuscripts, and official records to create this biography of the short but brilliant life of Sylvia Plath. While many focus on her depression and suicide, Heather Clark rewrites Plath’s life through the lens of her world: Plath’s motivations, desires, and her experiences with a flawed mental health industry. This biography restores Sylvia Plath’s reputation by highlighting her intellect, achievements, and art.

“Stranger in the Shogun’s City: A Japanese Woman and Her World” by Amy Stanley, available on Amazon and Bookshop from $15.99

Tsueno was the daughter of a Buddhist priest who ran away to Edo, one of the largest cities in the world, after failing to become the flawless, traditional woman her parents imagined. Tsueno’s story in a budding metropolis offers a unique lens to 19th century Japan, exploring the social conventions and economic boom through the life of an unconventional and strong-willed woman.

“Postcolonial Love Poem” by Natalie Diaz, available on Amazon and Bookshop from $11.24

Natalie Diaz is an honored and award-winning Mojave poet whose second poetry collection was chosen by Pulitzer judges for its ability to “explore what it means to love and be loved in an America beset by conflict.” Her poems flow with love, desire, joy, and grief through the bodies of Indigenous, Latinx, Black, and brown women wounded by America. It goes without saying that the poems in this collection are powerful, but also hopeful, searching for the good in America’s future through our ability to choose love.

“A Treatise on Stars” by Mei-Mei Berssenbrugge, available on Amazon and Bookshop from $16.51

In this ethereal, meditative, and spiritual poetry collection, Mei-Mei Berssenbrugge connects life and nature in cosmic poetry that pulls on the beauty of our experiences. Berssenbrugge communicates through the emotional effects of her poetry, drawing on the senses to give readers of light and motion, making it a truly unique expression of language through poetry.

“In the Lateness of the World” by Carolyn Forché, available on Amazon and Bookshop from $13.99

Praised by the Pulitzer judges for her use of “imagery of beauty and horror,” Carolyn Forché’s first new collection in 17 years traverses past and present to sift through the aftermath of history at the end of the world. These poems serve as a testament to the things and people we have lost and the spaces that remain. In poetry full of detail and unafraid to shy away from sadness, readers grieve for humanity while feeling the depths of solitude.

“Wilmington’s Lie: The Murderous Coup of 1989 and the Rise of White Supremacy” by David Zucchino, available on Amazon and Bookshop from $16.20

David Zucchino is a contributing writer for the New York Times and a previous Pulitzer Prize winner for journalism in 1989. In this book, David Zucchino writes a gripping account of insurrection, racially-motivated rebellion, and the rise of white supremacy during a coup 1898. Using individual accounts derived from newspaper articles, diaries, and letters, this forgotten chapter of racial and political terrorism in North Carolina is finally revealed.

“Minor Feelings: An Asian American Reckoning” by Cathy Park Hong, available on Amazon and Bookshop from $13.70

Cathy Park Hong is a poet and essayist who combines her personal experiences and cultural criticism to expose a silenced perspective of the “minor feelings” endured by Asian people in America. The author’s experience as a successful poet is clear in her writing: The sentiments are searching and honest, portraying a consciousness shared by many Asian American immigrants in the lies they’re told about their racial identity.

“Yellow Bird: Oil, Murder, and a Woman’s Search for Justice in Indian Country” by Sierra Crane Murdoch, available on Amazon and Bookshop from $13.71

When Lissa Yellow Bird was released from prison in 2009, she found her reservation changed by an oil boom. When she learned of a young oil worker’s disappearance, she set out on a complex mission for redemption and truth. Sierra Crane Murdoch used eight years of investigation to report on the story of two communities: one of an Indigenous reservation forever altered by the changing landscape of an oil boom, and another of the oil workers desperate for hope in an economic recession.