Skip to content
Iran has spent the 33 years since Operation Praying Mantis modernizing its navy with the goal of conducting high-seas operations. ... 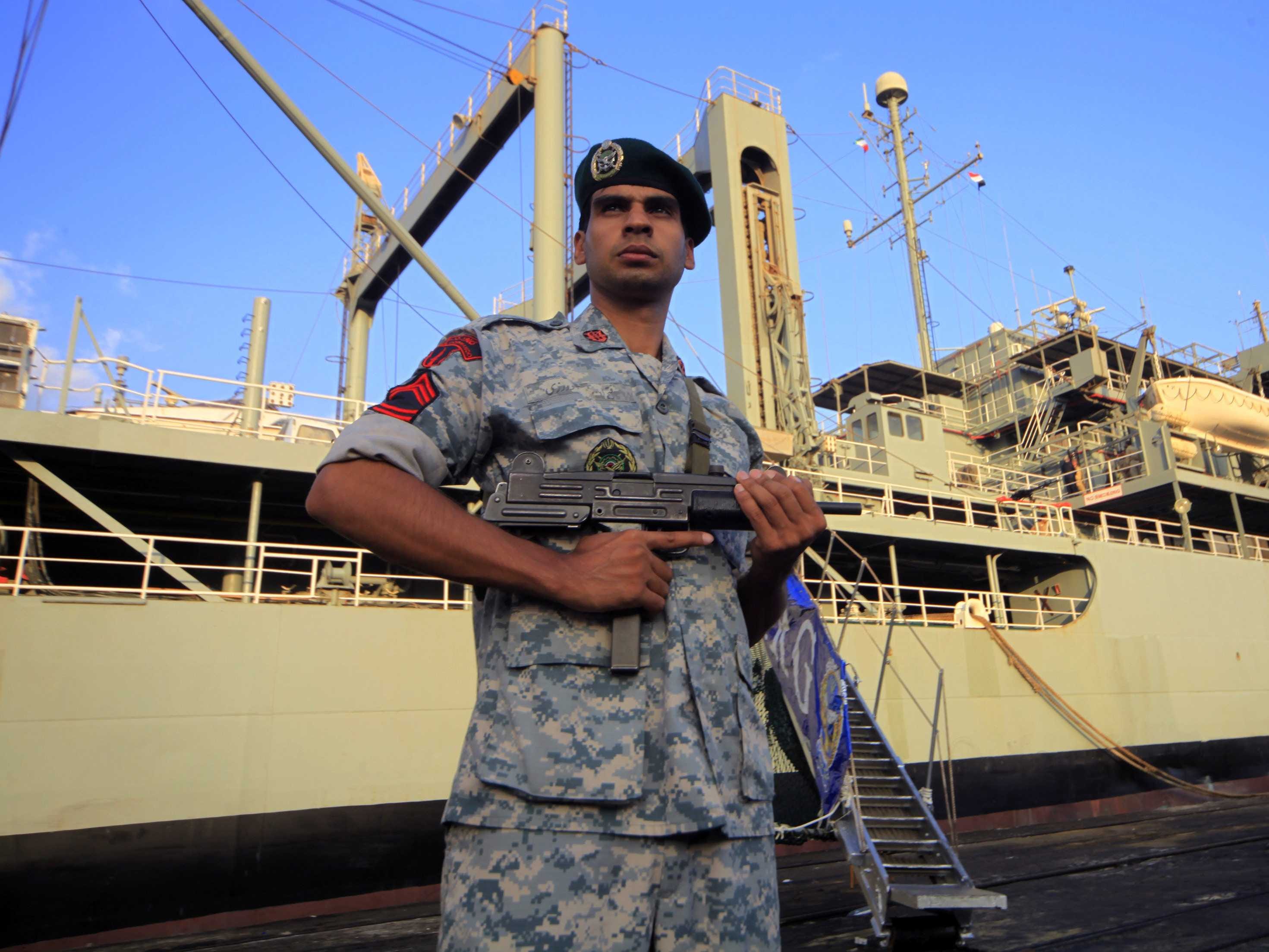 The first was the sinking of the IRIS Kharg in the Persian Gulf on June 2. Kharg, a British-built Ol-class replenishment tanker, was the Iranian navy's flagship and one of its most important vessels.

The second important development was the rounding of the Cape of Good Hope by two Iranian warships, the seabase ship IRINS Makran and the frigate IRIS Sahand, on June 4.

Makran, a converted oil tanker, is Iran's largest vessel, while Sahand is one of its newest and most advanced warships. They are the first Iranian naval vessels to sail into the Atlantic, a long-sought achievement.

These are the latest signs of progress for Iran's navy, which has been modernizing with the goal of being able to operate across oceans. Now, 33 years after a devastating defeat by the US, that navy is showing what it can do.

Officially known as the Islamic Republic of Iran Navy, or IRIN, Iran's navy is largely the result of an incomplete plan to turn its predecessor, the Imperial Iranian Navy, into a first-rate force.

Before his overthrow in 1979, Shah Mohammad Reza Pahlavi invested heavily in US and European warships, intending to make Iran the region's dominant maritime power. The shah hoped to support NATO operations in the Indian Ocean and wanted the alliance to establish a naval headquarters at Bandar Abbas.

The shah even considered buying a number of Invincible-class aircraft carriers and Sea Harriers from Britain and wanted to build a naval base at Chabahar capable of hosting US nuclear-powered aircraft carriers, but those plans were cut short by the 1979 revolution.

The new Islamic Republic eventually received some vessels that had already been paid for, like the Kharg. Other orders, including those for four specially designed Spruance-class destroyers from the US and multiple submarines, were canceled.

The IRIN's leadership was also purged by Iran's new authorities and then immediately thrust into the Iran-Iraq War, during which the navy took heavy losses.

In 1988, the IRIN lost two warships sunk, one heavily damaged, and dozens of sailors killed in a clash with the US Navy, known as Operation Praying Mantis.

After the war, the IRIN recognized that it needed to modernize.

"Praying Mantis was a turning point because it showed how the IRIN's conventional naval assets were vulnerable to the US," Farzin Nadimi, an expert on Iranian defense affairs with The Washington Institute, told Insider.

"With all the sanctions as a result of their nuclear ambitions, Iran never managed to rebuild its navy quite substantially," Nadimi said. "So, gradually, Iran embarked on this project of making their own warships."

Despite its industrial limitations, Iran has built a number of domestically designed vessels, including four Mowj-class frigates, five Sina-class fast-attack craft, and at least one Fateh-class submarine.

The four Mowj-class frigates, which include Sahand, are the IRIN's most advanced warships. They have phased-array radars and carry domestically made anti-ship missiles with a 124-mile range.

The IRIN has still faced setbacks. In addition to Kharg, Iran has lost two ships in the last three years, one of which was accidentally hit by a friendly anti-ship missile in 2020, killing 19 sailors and wounding 15 more.

New vessels were not the only changes. Iran's leaders, believing that asymmetric warfare was the best way to secure Iranian waters, shifted the IRIN's role in 2008.

The IRIN is now responsible for the Gulf of Oman and waters beyond Iran, while the Persian Gulf is guarded almost exclusively by the Islamic Revolutionary Guard Corps Navy, known as the IRGCN.

Created in 1985, the IRGCN fleet is mostly composed of armed speedboats, small missile boats, and patrol craft. It is frequently involved in provocations in the Persian Gulf. IRGCN vessels harassed US ships several times this spring, including a May incident that led a US Navy ship to fire warning shots at the Iranians.

While the IRIN and IRGCN do share responsibility for the Strait of Hormuz, they do not have a history of cooperation.

"The IRGCN is completely different organizationally and ideologically" and is "amongst the most religious and loyal" groups even within the larger Islamic Revolutionary Guard Corps, Nadimi said.

The IRGCN's expansion, which includes new advanced vessels, has largely come at the IRIN's expense.

The IRGC itself tends to get two to three times more funding than Iran's military. Combined the IRGCN's reputation for being more aggressive, that imbalance has led to tension between the two branches.

"There have been decades of coexistence between the two, but they have never had any major joint exercises, and that is very telling," Nadimi said. "They don't have any joint training, and they don't have any coordination at the command levels. They even have separate naval academies."

While the IRIN and IRGCN will fight together in a conflict, that lack of a real relationship leads many to believe they will not be as effective.

The IRIN, meanwhile, has ambitions for blue-water operations. It's already a player in the Indian Ocean and the recent trip into the Atlantic may have had multiple objectives.

US officials reportedly suspected that the Makran and Sahand were headed west for Cuba or Venezuela, potentially to deliver fuel and weapons. They continued sailing north, however, and their final destination is unknown, though it is believed to be Syria or Russia.

Using the IRIN to deliver fuel and weapons may seem odd, but it benefits Iran. Official naval vessels cannot be boarded and searched like regular tankers, allowing Iran to avoid sanctions.

Despite its recent losses, the IRIN is pressing ahead with its modernization and expansion. Iran has plans for new larger submarines and destroyers, including an ambitious trimaran design.

Now that the UN arms embargo has ended, Iran is looking to China and Russia for help in developing its shipyards and fleet. It may buy ships from China and Russia or use Chinese and Russian designs and technology transfers to build vessels on its own.

"If there aren't going to be any future sanctions, we will see more of the IRIN in the Indian Ocean, the Atlantic, and even the Pacific," Nadimi said.